I finally made it to a Brooklyn Nets game last month. I have been a die-hard New Jersey Nets fan for several years, but I hadn’t made the trek to Brooklyn yet, largely due to becoming a father and moving to Basking Ridge, N.J. 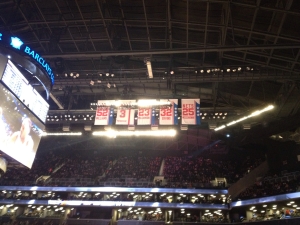 Overall, I thought Barclays Center was impressive. I have not been to Madison Square Garden since its overhaul, so I can’t compare the two buildings, but on its own merits, Barclays Center is visually stunning, and you couldn’t ask for a better location. Walter O’Malley really fucked up by moving the Dodgers from Brooklyn to Los Angeles, as the new Ebbets Field would have been on the same site.

Barclays Center is located in an actual neighborhood, unlike the Nets’ temporary home at the Prudential Center in Newark, N.J., where the area is still in the developing stages, or the Izod Center, which is in the middle of a God-forsaken swamp. The mass-transit options are plentiful, which is a good thing, because parking is not.

The overall look is modern and sleek, and the sightlines are gorgeous. The arena comes across very well both in person and on television.

However, I have one major issue with Barclays Center, which is the same issue I have with the new Yankee Stadium, MetLife Stadium, and probably pretty much every stadium or arena that opened its doors recently: The difference between the lower level and the upper level is gigantic, and Barclays Center is the most prominent example of this trend that I’ve seen so far.

All of the new facilities are following the same blueprint: Let’s cram a whole bunch of club areas and suites into the middle, and push the upper deck way up and way back. Fuck the poor and middle class!

The lower level of Barclays Center is palatial. The concourse looks like the lobby and shopping area of a Las Vegas hotel, and I’m talking about Caesar’s Palace, not Circus Circus. The concourse is well-lit and wide, with a staggering number of choices for food and beer, and a generous collection of bar tables for fans to use if they want to eat and drink prior to going to their seats.

After seeing the lower level, the upper level reminded me of the steerage section of the Titanic. The concourse was narrow and dark, and the choices were greatly reduced.

I am not a seat snob in the least. I practically lived in the upper deck of the old Yankee Stadium. I have never minded sitting higher up, as I have always been more concerned with a central location (home plate, 50-yard-line, center court).

My New Jersey Nets season tickets at Brendan Byrne Arena/Continental Airlines Arena/Izod Center were in the second row of the upper level, right on the center court stripe. The equivalent seats at Barclays Center were like sitting in the very top rows of the old arena. To be blunt, the seats absolutely sucked, and those were the best in the upper level.

And this is the reason why, although I am still a die-hard Nets fan, and I still follow the team religiously and watch as many games as I can, the odds of my attending more than one or two games per season are slim to none. It’s not worth going to a game unless you sit in the lower level, and the ticket prices in the lower level are beyond prohibitive.

I was fortunate enough to win my company’s tickets in a drawing. Without trying to sound like I’m spitting on a gift, the seats were decent, but certainly nowhere near the best in the house. They were about 20 rows up, which is great, but they were also behind the baseline, which isn’t bad when play is happening at the near basket, but makes it very difficult to follow action on the other end of the court. The face value of those tickets: $190 apiece. Seriously? There’s no way those tickets are worth $190 apiece. And if that’s what it takes to sit somewhere decent in Barclays Center, thank God for my 50-inch flat-screen TV.