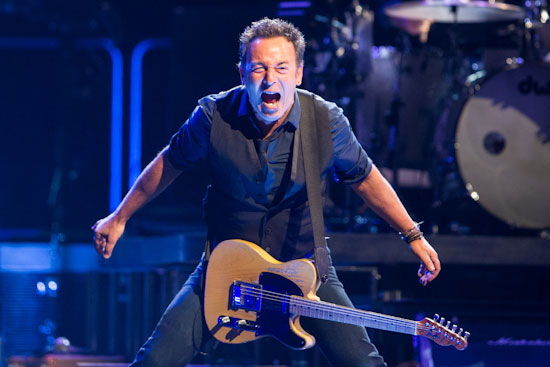 It was a very different experience, which I fully expected. The death of Clarence Clemons left a huge void, both musically and in terms of the band’s personality, and, while his nephew, Jake Clemons, and Eddie Manion performed flawlessly and admirably, there’s no replacing a legend.

Springsteen’s music has also branched out in several different directions for his past few albums, and Wrecking Ball is no exception. Very few of the songs on Wrecking Ball really sound like Bruce Springsteen and the E Street Band. This is not to say that it’s not quality music: It’s just different. It’s a very angry album, with a lot of edgy folk-type songs, and a lot of Irish influence.

One of the biggest differences I noticed was Springsteen’s demeanor. I am obviously a die-hard fan, and have seen him live several times, and I am used to seeing him sing with a pained expression that looks like he’s holding back a giant dump. But he was exceptionally animated during this show, singing the angry parts of songs with legitimate anger, and smiling during the more festive material, more so than I have ever seen him do.

The set list was heavy on newer material, which was no surprise. The songs from Wrecking Ball sounded like the band had been performing them for years, and the newer sounds were quite refreshing. Naturally, some classics were sprinkled in throughout the show, as well. And continuing the Springsteen tradition of pulling at least one song out of the vaults that no one in the audience ever expected to hear, the surprise selection on this night was “So Young and In Love.”

Clarence Clemons, the late, great Big Man, was recognized twice during the show. When the band was introduced early on, Springsteen saved him for last, as usual, and said to the crowd, “Am I missing anybody?” After allowing a few seconds for cheers and tribute, he added, “If we’re here, they’re here,” repeating it a couple of times for emphasis. And during the last song of the night, “Tenth Avenue Freeze-Out,” the entire band paused after the verse, “The change was made uptown and the Big Man joined the band,” for a very long, very emotional standing ovation. Well done.

It’s a new era for the band, and for Springsteen. The classic songs will never be abandoned, but that being said, there will never be another set list like the one from Giants Stadium (R.I.P.) July 31, 2008, which was, by far, my favorite Bruce show of all-time.

However, if you leave a show with Bruce Springsteen and the E Street Band feeling disappointed or cheated, you just weren’t paying attention. It may be a new chapter in their history, but they are STILL the heart-stopping, pants-dropping, hard-rocking, booty-shaking, earth-quaking, nerve-breaking, Viagra-taking history-making, legendary … E-STREET BAND!

I saw the last concert ever at Giants Stadium by Bruce Springsteen and the E Street Band last night, and I was a little disappointed. It was far from a bad show. I’ve never left a Springsteen show feeling cheated or unsatisfied. I just didn’t love the set list and thought many very necessary songs were left unplayed. I guess I was spoiled by my favorite concert of all-time, by the very same band in the very same location, last summer.

Even Backstreets, the fan site for Bruce junkies, pretty much agrees with me: “Closing night seemed to break very little new ground, however. The set list was a near carbon copy of the previous Saturday’s show, including the reprise performance of the Born in the USA album. The crowd certainly brought the noise, as exhorted by Bruce to do so, and the band’s performance was excellent, but as a whole, the show seemed to fall short of the heights that closing night in Jersey has brought in the past.”

The July 31, 2008, show was absolutely unreal, and there will never be another one like it. But last night’s didn’t even come close. If you would have told me that Bruce Springsteen and the E Street Band would play their final show at Giants Stadium and not play Rosalita, Jungleland, Thunder Road, Candy’s Room, Backstreets, Tenth Avenue Freeze-Out, Prove It All Night or Two Hearts, I’d have probably laughed at you. I didn’t expect all of those songs, but I certainly didn’t expect none of those songs.

And while music is certainly a matter of opinion and there is no right and wrong, I’ve never been a fan of some of the songs that were played last night. Seven Nights to Rock does nothing for me. American Land is a great song, but it’s run its course. Kitty’s Back is a fantastic classic, but I would have gladly sacrificed it for one of the songs mentioned above, or two, since Kitty’s Back is well over 10 minutes long. And while I’m not a huge Rolling Stones fan and the theme of the song was appropriate for the evening, I could have done without The Last Time.

And in the, “If It’s on the Internet, It MUST Be True” department, none of the rumors being bandied about came to fruition. I read in various places that the band applied for a special permit to extend the show to 1 a.m., yet I was actually sitting on my couch watching the end of the Red Sox-Angels game minutes after midnight. And I read about special guests including Jon Bon Jovi, Mick Jagger, Elton John and Bono, yet the closest thing to a special guest was Max Weinberg’s son, Jay, playing the drums during Born to Run (and doing a stellar job, much as he did when he played the entire show at the IZOD Center a few months ago).

On a more positive note, seeing Jersey Girl live is always special, although I think 70,000 people were shocked to find out it was the last song. I love Wrecking Ball, the tribute to Giants Stadium, and sincerely hope they release a recording of it so I don’t have to rely on a bootleg. Spirit in the Night was awesome, and Tougher than the Rest was a nice surprise.

Don’t get me wrong: I am NOT bashing the band. As I said earlier, the effort and the performance last night were still fantastic, and I still believe they are, by far, the best live band around. And while I will probably not to go either of the November shows at Madison Square Garden for various reasons, many of them involving my dwindling bank account, I will definitely see them the next time they come around, although they are allegedly taking a two-year hiatus from touring. I just expected to close Giants Stadium out with an all-time epic classic show, and not an “average” Springsteen show, even though an average Springsteen show is still better than most other artists’ best shows.

Bring on your wrecking ball.

Last night’s set list:
Wrecking Ball (with Curt Ramm)
Badlands
Spirit in the Night
Outlaw Pete
Hungry Heart
Working on a Dream
Born in the USA
Cover Me
Darlington County
Working on the Highway
Downbound Train
I’m on Fire
No Surrender
Bobby Jean
I’m Goin’ Down
Glory Days
Dancing in the Dark
My Hometown
Tougher Than the Rest
The Promised Land
Last to Die (with Curt Ramm)
Long Walk Home
The Rising
Born to Run (with Jay Weinberg)
* * *
Raise Your Hand
The Last Time
Waitin’ on a Sunny Day
Seven Nights to Rock
Kitty’s Back (with Curt Ramm)
American Land
Jersey Girl

I blame my Hebrew-school tutor for all of this. As a reward for successfully making it through the Torah portion of my Bar Mitzvah without puking on the sacred parchment or tripping up over the Hebrew words and accidentally telling the congregation to go sodomize sheep, he bought me the album — yes, the actual 12-inch, vinyl record album — of Born to Run by Bruce Springsteen and the E Street Band.

At the time — the time being 1981 — I knew a few Springsteen songs, but I wouldn’t have called myself a fan. I knew “Hungry Heart” because it was all over the radio, and I knew the title track from Born to Run, but that was about it.

Then, I brought the record home and put on the first track, “Thunder Road.” I was an instant Springsteen junkie about three minutes into the song, and it’s only gotten worse.

Thank you, Mark Elber, wherever you are.

I went to see the heart-stopping, pants-dropping, hard-rocking, booty-shaking, earth-quaking, nerve-breaking, Viagra-taking history-making, legendary … E-STREET BAND at the debacle of a facility currently known as the IZOD Center last night. Between how bland the home of my beloved New Jersey Nets is and how pathetic the half-finished Xanadu God-knows-what project looks, they really should drop a nuclear bomb on that part of the Meadowlands (the two football stadiums and the track can be spared).

Anyway, for whatever reason, I wasn’t as fired up as I usually am to see The Boss. I was excited, but I didn’t have that all-day adrenalin surge. I guess part of it is that I know I always like the end-of-summer Giants Stadium shows better — speaking of which, the final concerts at Giants Stadium will be performed by none other than Bruce Springsteen and the E Street Band, with three shows wrapping up Oct. 3. And part of it is that things have been crazy in my life, but in a good way — working part-time, tons of visits to the new Yankee Stadium, lots of softball games and, most important, my girlfriend moving in soon.

Photo by A.M. Saddler, from Backstreets.com

But as usual, the boys didn’t disappoint. This was yet another fantastic show, with some songs that I hadn’t seen played live since the Born in the USA tour in 1985. Pleasant surprises included “Seeds,” “Johnny 99” and “The Ghost of Tom Joad” — it seemed like a mini-set tribute to the unemployed — and always welcome classics included “Thunder Road,” “Jungleland” and “Rosalita.” And I saw the band play one of my personal favorites, “I’m Goin’ Down,” for the first time since the previously mentioned Born in the USA tour.

I am exhausted and drained, but I will be sure to get my energy back by June 1, when tickets for the next assault on New Jersey go on sale. What a fucking great show.

The set list (thank you, Badlands.com):
Badlands
Adam Raised a Cain
Outlaw Pete
Radio Nowhere
She’s the One
Working on a Dream
Seeds
Johnny 99
The Ghost of Tom Joad
Raise Your Hand
Growin’ Up
I’m Goin’ Down
Prove It All Night
Waitin’ on a Sunny Day
The Promised Land
The Wrestler
Kingdom of Days
Lonesome Day
The Rising
Born to Run
* * *
Hard Times
Thunder Road
Jungleland
Land of Hope and Dreams
American Land
Rosalita