When I was laid off from my old job a little over three years ago, one of the things that helped me kill time was Scrabble on Facebook. I still play a lot. I’ve taken up Words with Friends, as well, but the competitive bastard in me prefers Scrabble because it keeps win-loss stats. 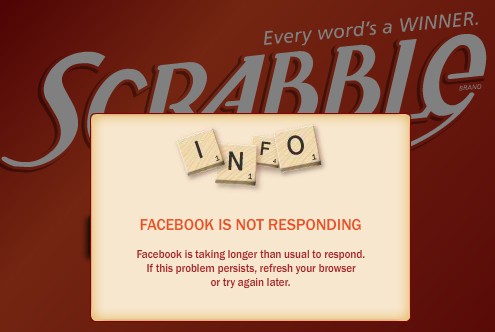 However, one of the sad things, aside from the fact that my losses still outnumber my victories, is that in the three years-plus that I’ve been playing the game, three people who I knew pretty much exclusively through Scrabble have passed away, with the latest occurring last night.

I actually knew the first person to pass away well before Facebook, from the days when AOL was actually the closest thing we had to a social network, and not just a company for Arianna Huffington to mismanage into the ground. We met in a chat room about sports, and stayed in touch via IM and email, but never actually met, or even spoke on the phone. She had brain cancer, and after it appeared that she had beaten it, the disease came back with a vengeance. I found out because her sister posted it on her Facebook page.

The second happened a few months ago, and I found out the same way, but I have no clue what happened, and I don’t even know if the guy was sick. Other than occasional chit-chat during Scrabble games, we didn’t really interact with each other at all. I was still stunned to learn of his passing, even though I barely knew him.

This morning, I learned about the third Scrabble friend to pass away. He had been battling Crohn’s disease for some time, and was in and out of the hospital, often unnecessarily apologizing when he went days without making a move. Much like the second, I didn’t really know him, other than the same type of in-game chatter, but reading the news this morning still made me pause for a bit.

Death is a strange thing. It always seems to make people stop in their tracks, no matter how remote their connection to the deceased was. Even though I never really knew any of the three people I just wrote about, I hope they are resting easy.

In my unemployed state, I’ve been playing an awful lot of Scrabble on Facebook — far too much if you listen to my girlfriend.

Over the past couple of days, I’ve been fortunate enough to have the right tiles to be able to clear my rack (heh heh, heh heh, I said “rack!”) and strike it big with the 50-point bonus you receive for doing so, which has propelled me to some huge early leads.

And three times in the past two days, the wimps and wusses I’ve played against have quit the game immediately after I played those big-point words.

Buck up, people. Coming back from a 100-point deficit is far from impossible. I actually managed to blow a 140-point lead, and I fell just short of coming back from being down 150 points.

Is it asking that much to play the game out? Wusses.

I’ve been unemployed for a little over three months now and, with more and more people unfortunately joining me, I thought I’d share some of what I’ve learned in the hopes of being helpful.

• No matter how productive I’ve tried to be, there’s only so much that can be done, and this results in lots of free time. This can be good, but it can also be bad, because I’ve started to second-guess myself and wonder if there are more productive things I could be doing. When it comes down to it, you can only check the job sites so many times without driving yourself crazy. One thing that I’ve found to be very helpful: If I have a few errands to run, I’ve tried to space them out over a few days instead of doing everything Monday, then sitting around the house the rest of the week. It definitely helps to get out of the house at least once a day and do something. Staring at the PC all day isn’t good, whether it’s monster.com, Facebook Scrabble or YouTube.

• I obviously desperately want a job, but I’m worried about two habits I’ve developed that will have to disappear quickly once I’m hired. The first is waking up to feed the cats anytime between 6:30 a.m. and 7:30 a.m., then going back to sleep until around 10 a.m. or 10:30 a.m. There will obviously be no option to go back to sleep once I’m working. The second is spending the majority of the day in sweatpants or flannel lounge pants. Most offices aren’t quite so tolerant of that sort of attire.

• I never realized this when I was on the other side, but hearing people complain about their jobs while I don’t have one is maddening. I don’t take it personally and I know it’s not meant in a harmful way — jobs are part of everyday life, and it’s natural for the conversation to turn to them. But, as scary as it sounds, I actually miss some of the things that used to annoy the hell out of me. And when I finally do escape this exile, I will try my best to remember to not bitch and moan about my job in front of those who haven’t escaped yet.

• Facebook in general and Facebook Scrabble in particular are highly addicting. I’ve learned so many Scrabble tricks and words I never knew existed that bail you out of a tough Scrabble situation and earn you big-time points. Until I started playing Facebook Scrabble, I never knew the words xi, za or zee existed, but they’re among my favorites now, even though I don’t know what they mean, because they’ve won games for me. I may even look up their definitions and try to work them into conversations one of these days.

• Random play on iTunes may be the greatest invention of all-time. It’s definitely in the top 10. Sliced bread is overrated.

• Cats really do sleep all day. Once the novelty of having their human home during the day wore off, which took about two days, I became more of annoyance to them than company. There’s nothing like getting a phone call or e-mail, only to receive a dirty look from the cat who was roused by the sound of the phone or the PC. The other day, one of my cats buried herself under a throw blanket at around 10:30 a.m. and didn’t come out until after 5 p.m. I actually poked her once every hour just to be sure she was breathing. I am the proud owner of two lazy sacks of fur.

I’m seriously ready for this to end, now.

I have a confession: I’ve developed a serious addiction since being laid off in early October. My addiction isn’t alcohol, cigarettes, caffeine or drugs: It’s Facebook Scrabble.

It’s a good way to kill time between surfing the Web for jobs to apply to, and it’s helped to keep my brain and vocabulary sharp. I find it funny that I’m addicted to Facebook Scrabble while I’ve only played the traditional board game a handful of times.

This morning, however, I encountered a person who needs to be on the receiving end of a savage beating.

I started a public game, meaning any random Facebook user looking for a Scrabble game could sign on as my opponent. I then checked my e-mail and read two stories on ESPN.com, which took all of three or four minutes. Upon returning to Facebook and the Scrabble game, the jackass who had signed up to play me quit the game after playing one turn and left me this nasty instant message: “Here’s an idea: When you start a game, how about being around to play it?”

Well, douchebag, here’s an idea: Why don’t you get over yourself and not get all snippety over a game of Scrabble?

The neighborhood yenta (the gossip-monger who’s in everyone’s business, for those not well-versed in Yiddish) is now obsolete.

Within a period of about nine hours, I found out, through social-networking site Facebook, that the fates of two couples I’m friendly with had changed dramatically — one bad, one good.

One couple, who had been dating at least a couple of years, broke up. And another, who have been together a shorter time, got engaged.

I’m friends with all four people so, needless to say, I’m bummed about the breakup and excited about the engagement.

Facebook is truly remarkable, though. I was a very late convert, finally nudged into joining by my girlfriend, and I’ve found it to be about 1,000 times more useful than MySpace (I’m not setting the bar very high, I realize).

In the three weeks or so that I’ve been a Facebook member, I’ve managed to: reconnect with some old college friends; rekindle my Scrabble skills (although I have a long way to go based on the results of the last game I completed); learn a few things about some of my other friends whom I don’t speak with every day; see some great pictures of some of my friends and their friends and families; and, most important, waste some time during the work day.

After all, all work and no play makes 9 a dull boy (and really makes him crave cocktails).